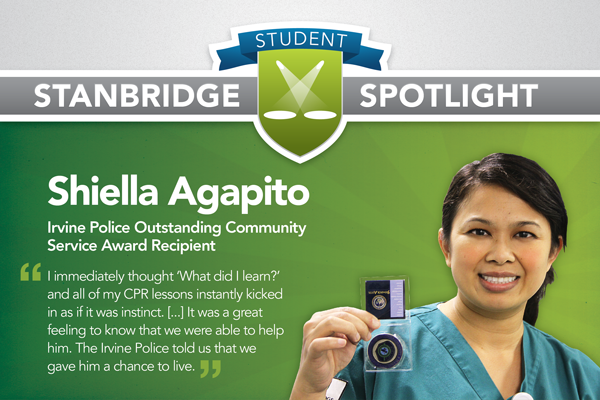 While many people prepared to celebrate the New Year, one Stanbridge College Vocational Nursing student applied her nursing skills to ensure a man would live to see 2012.

Term 4 student, Shiella Agapito was driving through her Irvine neighborhood on December 31, 2011. Her attention was turned to a barking dog, and then to the elderly man lying on the ground.

“My first instinct was to help this man,” stated Shiella. “No matter what, I had to turn around.”

She turned her car around and approached the man. Shiella assessed that the man was not getting enough oxygen as the bluish tint to his skin deepened. She urgently asked a nearby kid to find his mother and call 911. Shortly after, she determined the man had no pulse and began to perform CPR.

“I immediately thought ‘What did I learn?’ and all of my CPR lessons instantly kicked in as if it was instinct. There was really no time to think. I started to perform the ‘Look, Listen and Feel’ procedure, knew that he was not breathing and then began the chest compressions.”

Stanbridge College Vocational Nursing students learn to perform CPR in term 1. Instructors consistently focus on teaching the students to keep their calm as they assess the situation, look, listen and feel to see if the person is breathing, give two breaths and then start counting during CPR.

As Shiella attempted to resuscitate the man, the man’s wife came outside emotionally distraught. In order to calm the wife down and calm her own nerves, Sheilla asked the wife to start counting as she continued the chest compressions.

“It sounds like Shiella did a wonderful job of keeping her cool and doing exactly as she learned,” stated Stanbridge College instructor Deborah Lord.

Due to Shiella’s actions and help from other neighbors, the man began to breathe again and was taken to a local hospital. He survived with the aid of treatment to a blockage in his coronary artery and continues to recover today. The Irvine police and emergency response team commended Shiella with an Outstanding Community Service Award for her act of bravery and compassion.

“The man was breathing by the time he entered the ambulance. It was a great feeling to know that we were able to help him. The Irvine Police told us that we gave him a chance to live,” stated Shiella.

“Stanbridge College is very pleased to have Shiella as a student,” stated Yasith Weerasuryia, President of Stanbridge College. “Her tremendous act of compassion is admirable and shows that she has the skills to be a great leader in her future nursing career.”