Stanbridge graduate Miriam Galindo is a passionate and hardworking individual who has never given up on her dreams of working as a psychiatric nurse. As a recognized valedictorian of her 2017 class, Galindo had been working extraordinarily hard to accomplish these deep-rooted goals for herself.

Galindo told us that Stanbridge was the open door she had been patiently waiting for for nearly thirty years, and she is forever grateful for that open door presenting itself when it did. Galindo holds a Bachelor’s degree, Master’s degree in Social Work, a PhD in Psychology, a certificate in Paralegal Studies, and just completed her Vocational Nursing certificate program at Stanbridge. She is already licensed in Clinical Psychology, Clinical Social Work, Nursing, Child Forensic Interviewing, and Child Play Therapy.

Galindo’s stats are impressive, to say the least. But her tenacity and perseverance through difficult struggles and hurdles has strengthened her spirit and her drive more than anything else, and has gotten her to where she is today.

“My Dad died of complications due to end-stage Alzheimer’s disease on my first day of fourth term during the Vocational Nursing program at Stanbridge,” Galindo recalled. “I was a co-caregiver during his lengthy decline which meant I spent every day of my vocational nursing program in a state of sustained vigilance, constantly on-edge, and constantly attending to unpredictable crises at a moment’s notice. I learned to be very creative, taking care of his ever-changing needs while also working full-time and studying for exams. My Dad taught me so much and I am so grateful for those years.”

Even through the turmoil of losing a loved one and acting as their caregiver as they wind down their life, Galindo stayed strong and continued pushing forward toward her goals. What motivated her with more power and drive than anything else? Her desire to care.

“My goal has always been to help others,” Galindo explained. “The world around us is full of people in need. If I don’t have the skills necessary to meet a particular need, I make it my duty to immerse myself in whatever it takes to learn and master the skill—not just half-way but to the highest level of excellence.” 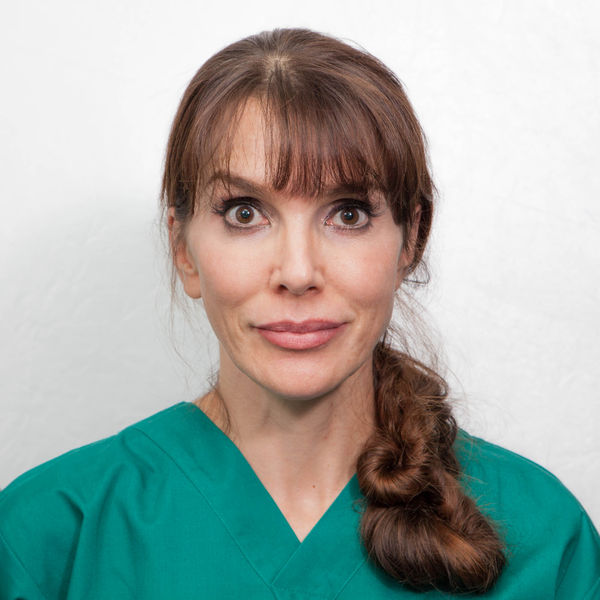 Her original desire was to become a psychiatric nurse with a specialization in gerontology. “Thirty years ago, as a working college student, I completed all of the prerequisites for nursing school prior to submitting applications to UCLA and California State University Long Beach (CSULB). Although I was accepted into both nursing schools, I hit an impasse which seemed insurmountable at the time . . . ,” she said.

As happens to most working adults, the realities of life took hold. Galindo spent countless hours researching various nursing schools, and as a result, she had an overflowing pile of brochures, catalogues, notes, flow-charts, and letters of inquiry, but no final solution. With each prospect, cost and time always inserted themselves as inevitable roadblocks for Galindo. Then, Stanbridge University School of Nursing presented itself. “It was the open door for which I had patiently waited thirty years. I jumped in with both feet and haven’t looked back.”

Galindo was particularly excited about Stanbridge’s emphasis on character and community service. “Stanbridge doesn’t just offer a degree. It develops leaders with a servant’s heart,” she said. “It pushes students to a level of excellence beyond any perceived limitation they may impose on themselves. In focusing on character over achievement and personal acquisition, we become better equipped at hearing and seeing the needs of those in our community, particularly those who are the most vulnerable and disenfranchised.”

As a valedictorian of her class by the time graduation came around, Galindo felt honored and humbled by her cohort. She recognized the value of being around like-minded classmates and other similarly passionate and driven individuals. “What an honor and joy to be working shoulder-to-shoulder with such an amazing, caring, intelligent group of classmates at Stanbridge University,” she said. “They are the future, and what a bright future they will bring.”

As such an accomplished expert in her chosen field of interest, with many degrees and a full heart dedicated to always learning more, Galindo represents the exemplary Stanbridge student. Although her journey is uniquely her own, her vantage point is common among students at Stanbridge—strong-willed and experienced humans, driven to contribute more to the world than expected.

Galindo didn’t have an easy time accomplishing her goals, but she did it; with perseverance and pride. She offers one last piece of advice to students who are like her and want to contribute to the greater public health with their careers.”Being a student is not always a smooth ride,” she said. “Don’t get discouraged. Stick with it. Keep your eye on the goal. Soon, you’ll be as adept as an Olympic gymnast, standing upright, a perfect 10, with both hands in the air, chin up, victorious. You’ll see.”

For more information about the Vocational Nursing program at Stanbridge University, visit www.stanbridge.edu/program/vn.