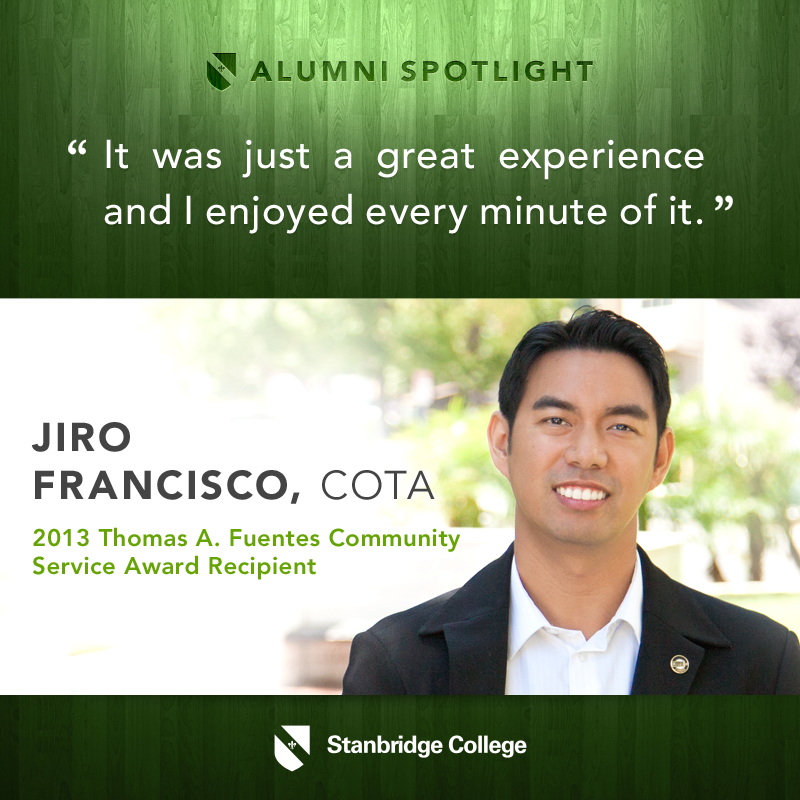 Occupational Therapy Assistant graduate, Jiro Francisco, COTA, loves OT, and not just the overtime he puts in to everything he sets his mind to. Jiro is the winner of the 2013 Thomas A. Fuentes Community Service Award for his dedication to his community and consistent enthusiasm he brings to the field of occupational therapy and everyone he talks to about it.

Prior to starting his education and becoming a Certified Occupational Therapy Assistant (COTA), Jiro’s grandmother suffered from a stroke, paralyzing the right side of her body. Jiro and his family stepped in and helped her with her daily activities. After realizing he could make a profession out of this type of care, he was inspired to start his OTA education.

“For about two years I was able to help my grandmother with transfers from her wheel chair to the sofa, her bed, and the car,” stated Jiro. “And I didn’t know that the field of OT existed back then because this was in the Philippines and was about fifteen years ago. When I found out there was such a program, I saw myself being in that field immediately.”

Jiro’s next step was to find the right training that could help him to get his COTA license. He chose Stanbridge College and instantly clicked with the OTA instructors and with the Therapy Skills Lab.

“It was just a great experience and I enjoyed every minute of it. The instructors guided us in labs with their expertise and made us feel that what we were doing is exactly what we needed for the real world. The therapy labs have a complete range of equipment and tools that students can use in the real field of OT. All of them were accurate and precise, even more so than the facilities I’ve been to during my fieldwork.”

“The Stanbridge College REACH program helped me see how we, as students, could reach out to our communities. It showed us how we could help those in need, not only financially, but also through our effort and time.”

In April of 2013, Jiro took that lesson to heart and initiated the biggest student-lead community service project at Stanbridge: a week-long, four-part fundraiser called “OT Week” benefiting the Special Olympics of Southern California. Over 30 students worked together to raise over $1,700 for the non-profit. As part of that event, Jiro helped facilitate the first meeting of leaders from the Occupational Therapy Association of California with Stanbridge students.

But Jiro didn’t stop there. He wanted to continue to promote OT to help people understand what it is and how it can help those in need to live life to the fullest.

“I wanted to promote occupational therapy because when I was just seven years old I had an injury in my hand and it forced me to write with my left hand. If only I had gone through occupational therapy, I would have saved the function in my right hand and been able to live a more normal life.”

Soon after ‘OT Week’ he and his classmates organized a free car wash to raise awareness for OT. Jiro, along with fellow OTA student, Erika Agustin, realized that as a group, they and their classmates were a powerful symbol of the strength and diversity that could inspire other students on campus to give back to their community and profession.

“What drove Erika and I to start the first OTA student group on campus was when we realized that the OT awareness events that we made were very successful. I wanted those events to be a good example to all the other OTA classes that come after us. They also benefited the students in helping them in their own OTA careers.”

Because of his volunteer work and dedication to OT, Jiro was nominated by his fellow students for the 2013 Thomas A. Fuentes Community Service Award. The award honors a graduate of the same year and their initiative and commitment to giving back to their local community. The award is presented at the annual Commencement Exercises hosted by the college.

“Receiving the Thomas Fuentes Community Service Award was a very big deal for me because it was not just me being recognized for that award, it was actually a group of people that stood behind me and believed in the service events I created.”

For now, Jiro and his classmate’s legacy will live on in the halls of Stanbridge and for Jiro, hopefully in the dreams and achievements of future OTA students.

“For current OTA students, I’d like them to stay focused on their studies and at the same time take the opportunity to reach out to the community and spread the word about occupational therapy. Each student deserves recognition for what they’re doing and they have to be out there, reaching out, and making sure that the occupational therapy field is acknowledged and widespread.”